Recent approvals include an O-1 for Korean product designer, Huira Koo, who received a BFA in Fine Arts from Parsons School of Design in New York and did a change of status from F (OPT) to O-1. Huira’s case was approved in eight (8) days – it was received by the Immigration Service on August 17 and approved on August 25 with standard processing. See more of Huira’s innovative designs at https://www.hi-koo.com.

Korean graphic designer, Gowoon Park, who has been on an H-1B for some years with various companies, successfully changed her status to 0-1. Ms. Park will be working on different projects through a U.S. agent-petitioner provided by our office. Ms. Park has been involved in several award-winning projects through her various employers. Goowon Park was so thrilled that her case was approved with regular processing in eight (8) days after being received on August 21 and approved on August 29. Gowoon writes:

Jane, I am so thrilled that this case was approved without any delays and so fast. Now I know why I was referred to you by my friend, another Korean graphic designer who also was successful in obtaining an O-1 visa through your office. Your detailed expert guidance through this complex process was absolutely invaluable. You were strict but you were right and it has paid off with this super-fast approval!  Thank you for making this dream come true. I am so exciting to start on this new chapter of my career where I will have more freedom to undertake projects with different employers.

Korean architectural designer, Yea Hwa Kim, who is based in Nevada, received a three year O-1 approval, her second three year O-1 obtained through our office.  Her case was received on August 25 and approved on September 2, also with standard processing.

Our successful track record with young architects continued in August and September when we received swift approvals for Chinese architectural designers, Yixuan Wang and Siqi Yang, both of whom were in F-1 status (OPT) and were sponsored by New York architecture firms. They had almost no professional experience prior to their OPT period. Nevertheless, their cases were approved swiftly and without an RFE. Yixuan received her Master of Science in Advanced Architectural Design from Columbia University in May 2016. She received a Bachelor of Architecture from Zhejiang University in Hangzhou, China, in 2015. Her case was received on August 28 and approved on September 8. Yixuan observed, when informed of her approval, that two of her friends who applied at the same time, received RFE’s for further evidence and she was grateful to have avoided this. Yixuan writes: 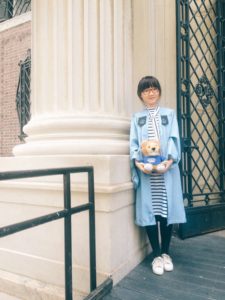 As a junior architect after graduation, applying for O1 visa is a difficult task. I am also under great pressure because I have only two months left before my OPT expire. So I consulted with many friends before I chose the office. The content of the application materials submitted by different law offices can be various. I eventually found Jane Orgel after comparison. During the process of my application, I felt this is a very reliable agency based on its rich experience, perfect service and high success rate. The result proved my choice was right. Jane gave me a preliminary judgement after knowing my condition. She told me that I will make a successful application based on my condition. At the same time, she also provided me with many resource and widen my thinking in terms of material preparation. Jane made a very detailed and specific plan based on my condition afterwards. The preparation process took a long time. The lawyer assistant who can speak Chinese helped me implement my plan step by step with great patience. Every unclear questions were efficiently solved during this process. The process of applying for O1 visa was a long battle but everything was perfectly finished according to the schedule. Thanks so much for Jane and Stephanie, I really gained a lot from this process. The previous pressure was turned into efforts, and finally became a great memory.

Siqi Yang’s O-1 visa application was received on September 5th and approved six days later, on September 11th  with regular processing. Siqi received a Master of Science in Advanced Architectural Design from Columbia University in May 2016. She received a Bachelor of Architecture from Harbin Institute of Technology (HIT) in China May 2015.

What’s the difference between a visa and an Approval Notice 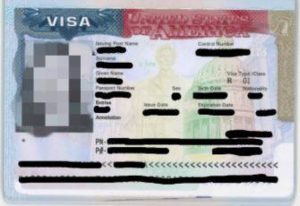 Many people are confused by these concepts. A visa is stamped in your passport and, apart from a few rare instances, can only be issued by a U.S. Consulate outside the United States. The visa allows you to travel in and out of the United States for the period for which the visa is valid. Most non-immigrant visas, such as an O-1, H-1B or L-1, are only valid for the time periods stated on the visa.  An Approval Notice indicates that the visa classification for which the beneficiary (applicant) has applied has been approved. If the beneficiary was in the United States in a different status, he or she may have 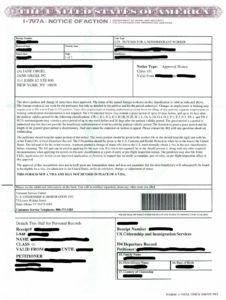 How long will my visa be valid for?

Another source of confusion is the Visa Reciprocity schedule.  The Visa Reciprocity Schedule is based upon agreements between the U.S. Department of State and individual countries. The agreements delineate the validity period for various visas and how many entries can be made during that time period. For instance, Chinese nationals may have received a three- year O-1 Approval Notice but will only receive an O-1 visa stamp valid for three months and one entry into the U.S.  When they enter the U.S., they should receive an I-94 valid for three years but once they leave the U.S. they will need to get a new visa stamp from the U.S. consulate in order to re-enter. The I-94 is now issued online and after entering, people should download it to check they received the correct amount of time.